50th Anniversary of the release of “A Man Called Sledge”

Sledge, an outlaw with a large price on his head, is determined to steal a cargo of gold en route to a fortress. Putting aside the idea of ​​attacking the convoy during transport because of the presence of a large number of well-armed guards, Sledge comes up with a clever trick: using one of his henchmen Erwin Ward, pretending to be a law officer, Sledge is taken to the fortress as a prisoner in Ward’s custody. After taking control of the fortress and the gold it soon ends up in the hands and those of his henchmen who gamble it away. A fierce battle then rages between the gang, to take sole possession of the spoils. During these clashes Ria, Sledge’s woman is brutally murdered. For this deed Sledge turns on his men and eliminates the murderers one at a time and in the end loses the gold.

Garner wrote in his memoirs that this movie was "one of the few times I've played a heavy and one of the last. I wish I could remember why I let Dino de Laurentiis talk me into this turkey. The poster says "Not suitable for children." It should say "not suitable for consumption." 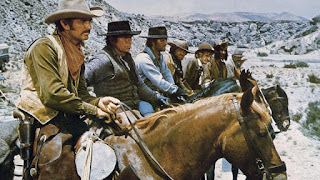