The new adventure of the African-American cowboy Deadwood Dick in the bookstores and comic book shops on March 26th. With the script by Mauro Boselli and the drawings by Stefano Andreucci.

As a child I was attracted to science fiction and fantasy, and still am, but later I realized that westerns were also a form of fantasy. My family had lived through the final part of the epic of the West, going through the years of the Civil War. So my family history is intimately linked to that world, to that broad mythology of the West that I always liked so much - Joe R. Lansdale

He is the Texas writer who has been able, book after book, to conquer readers from all over the world. During his career, Lansdale has used various narrative registers and has dealt with very different genres: noir, science fiction, horror ... His novels have shown his preference for the use of strong language and black humor that constitutes the original stylistic code. A unique sound that is also the protagonist in the stories of Deadwood Dick.

In DEADWOOD DICK. BLACK HAT JACK, the African-American cowboy  Deadwood Dick in fact he tells one of his most incredible adventures in a light-hearted way. An epic feat during which he, his friend Black Hat Jack and a handful of buffalo hunters had to face the attack of hundreds of warriors Comanche, Cheyenne, Kiowa and Arapaho. A day when it was really difficult to keep the scalp in the head ...
The story, written by Mauro Boselli and with drawings and cover by Stefano Andreucci, is inspired by the story in which Joe R. Lansdale recalls the Second Battle of Adobe Wells of June 27, 1874. The volume is also accompanied by an interview with Lansdale made curated by Luca Crovi and Seba Pezzani. 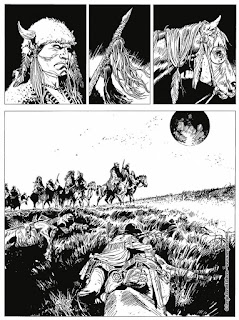