Music in the city without law

The Fun West of El Campello becomes on February 9 in Sin City, a day set in the American West

There will be concerts by The Morlocks, The Jackets, Howlin 'Jaws and Link Protudi and the Jaymen. 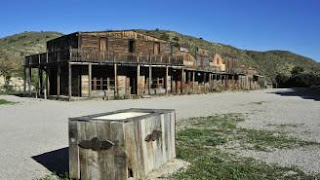 Duels in the sun, outlaws staging saloon brawls while the music plays, gamblers and bounty hunters will be part of the imaginary landscape of the wild west next February 9, 2019 in Sin City, the festival of western and rock and roll music that will be held in the town Fun West of El Campello.

This site, located in the Barranco Hondo, Spain and which on other occasions has served as the setting for shooting post-apocalyptic films or Mad Max meetings, will become a true "lawless city" of the American West, with activities from noon to dawn they include wild rodeo, western market, food service all day, prizes to the best disguise or the most intrepid cowboy and musical animation in the streets.

Organized by Cactus Club, Mono Alicante and Santa Leonor, the trip to the west will feature music in the Saloon of four major international bands: The Morlocks (USA), The Jackets (Switzerland), Link Protrudi and the Jaymen (USA) and Howlin 'Jaws (France). In addition, there will be DJ sessions of Bola, Constan, Mr. Varo, Crividelic, Emilio Smartboy, Bone DJ and Legendary Hip Shakers

The Morlocks is a garage band that will present their new work, Bring on the Mesmeric Condition, live. Formed in San Diego in 1984, they became a pillar of the West Coast scene and are now one of the great revival garage-punk bands,

The Jackets is an energetic trio of garage-punk-psych-freakbeat based in Bern, Switzerland, and formed in 2007. It has three published works being the last Shadows of Sound and is a band that stands out for its powerful shows that combine diverse styles

After military in punk, Howlin'Jaws looked back and discovered that the 50s and 60s, rock 6 roll, rockabilly and beat were theirs. Despite their youth, they have barely played a year, they have already given more than two hundred concerts and they have revolutionized the European rock scene.

Guitar, surf, rock and instrumental garage to burst the scenes are the weapons of Link Protrudi and the Jaymen, captained by Rudi Protrudi, alma mater of The Fuzztones.

Tickets (25 euros in advance and 30 euros at the box office) at movintickets.com.