Aldo Sambrell, another soccer player who triumphed in the cinema 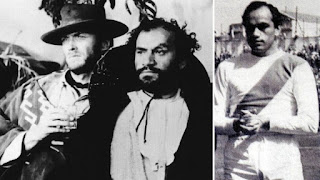 The Vallecano native played in Mexico and when he returned to Spain he played for Real Madrid. He signed with Alcoyano and later, for Rayo. He hung up his shoes and became a villain in spaghetti westerns of the 1960s and 1970s. He would go on to appear in 300 films.

Alfredo Sánchez Brell (Madrid, 1931-Alicante, 2010) played for Rayo during the 1959-1960 season, a team that coincided with San Román, Yanko Daucik and Peñalva. The Vallecano was defender and only played two games (Recreativo and Murcia) in Second. However, before passing through Rayo, he played in Monterrey and Puebla de México, where he was known as Madrid-born Sánchez. When he returned to Spain he signed on for Real Madrid, but finally he signed for Alcoyano and later, for the Strip.

That is the summary of his career in football, before devoting himself completely to acting. Then he was known as Aldo Sambrell. His first contact with that world came as a child, when he had to set course for Aztec lands in exile with his family. There he sang rancheras (under the name Alfredo de Ronda and shared a poster with Manolo Caracol and Joselito) and was advised to study Dramatic Art. Something that alternated with his facet as a player.

Back in Spain, after hanging up his shoes, director Rafael Romero Marchent changed his life. I was looking for a supporting actor, with the only requirement of knowing how to ride a horse. Sambrell assured him that this was the case and had to take classes to put his face in the cinema. This he did and ended up with over 300 films under his belt and became an often seen villain of the spaghetti westerns of the 1960s and 1970s.

He debuted with 'Atraco a las tres' (1962) and participated in 'For a Fistful of Dollars' (‘64), 'For a Few Dollars More' (‘65) and 'The Good, the Bad and the Ugly' (‘66). He had a great relationship with Sergio Leone  and made the director the godfather of his son, Alfredo Xavier Sánchez Cavaleiro, who was born during the shooting of one of the films.

When the western went out of fashion, he decided to try the production and direction of action movies and adventures. He was unknown to the Spanish public, but he was recognized in the United States and Italy (Premio Internazionale Fontana di Roma). In addition, his life inspired a book ('Aldo Sambrell, the Most Ruthless Look') and a documentary ('Dry River'). The ashes of the actor, Atlético fan, rest in the desert of Tabernas (Almeria).