Igreja e Convento de San Bonaventura" (The Church and Convent of San Bonaventura) is located in the abandoned village of Monterano Velho, Rome, Lazio, Italy. It is the venue of many films made in the vicinity of Rome. 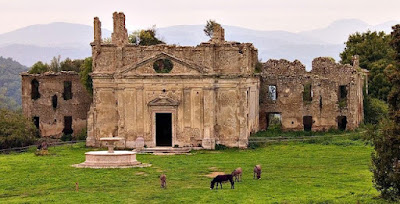 Monterano Vecchio, the eternal beauty of an abandoned village Monterano Vecchio is an abandoned village rather than a village set abandoned feudal village of the Monterano Canal in the province of Rome, located inside the partial Satural Reserve of Monterano. For its beauty and especially for its proximity to Rome (and Cinecittà) it was used like a cinematographic set for several films. Archaeological finds acquired by researchers found evidence of the existence of a feudal village of the Bronze Age (XI century BC). After a particular fervor during the Etruscan period, they prove, the tombs that were found in the district, which reached its peak in the Middle Ages. In fact, in this period it became an Episcopal.

In the 11th century, it became part of the territory of St. Paul's Abbey in Rome and its importance, mainly due to the particular location of the consular, continued through the centuries, often with fights between the papacy and the Mayor of Rome. In the fourteenth century, it became a fief of the Anguillara family, then passed to another family very close to the papacy, including the Orsinis.

In a short time it passed from Feudo to Duchy. During this time it began to lose importance as a trade route, Monterano along with this also suffered the same decline, so much that it began to lose its population.

Precisely the decline of the town occurred in 1799, when, due to a dispute over wheat by Monteranesi and Tolfetani, the village was terribly looted by the French. To make matters worse was the spread of malaria that decimated the population, especially the farmers. From historical sources the malaria thesis is not very clear, because in the region there are no lakes much less marshes.


Entering the Old Monterano is like entering a world where one can admire the harmonious union and the existence of all the ages that have occurred throughout the centuries. Many are monuments of great artistic and historical importance. The most impressive is undoubtedly the castle, which dates back to the 8th century. This fortress, surviving through two centuries, underwent many transformations, until it became the Palace of the Barons under the skilled hands of Gian Lorenzo Bernini in 1679, in the baroque period, at the request of Prince Altieri.
But Bernini's genius did not end only in the rehabilitation of the Palace of the Barons. On an outer wall of the building itself, taking advantage of the element that consisted of rocky part of the building, a fountain was built on top of which a lion poses by wagging a leg with a jet of water that would end directly in the basin of the fountain. Art and nature come together in a harmonious marriage, this was Bernini's style.

In the same period, the convent and the church of St. Bonaventure, built by Mattia de Rossi, followed a project by Bernini. Although in ruins, it is admirable in its grandeur, in the middle of a flat area. Facing a beautiful octagonal fountain (a copy of the original, now kept in the atrium of the Municipality of Canal Monterano). Parallel to these seventeenth century witnesses, there are ancient Etruscan buildings such as the tombs that were later converted into wineries, and Roman remains such as the aqueduct (recently restored by the municipality of Rome).
CINEMA

As mentioned earlier, somewhat because of its proximity to Cinecittà, and known for its particular beauty, Monterano Vecchio was often adopted as a film set for several films, especially during the 1950s. Including "Ben-Hur" with Charlton Heston , "Brancaleone alle Crociate" (Brancaleone in the Crusades - Brazil -1970, Brancaleone at the Crusades) with Vittorio Gassman "Il marchese del Grillo" (The Marquis of Grillo - Brazil – 1981, The Marquis of Grillo) with Alberto Sordi, "Guardie e Ladri" - 1951 (“Cops and Robbers”) with Totò and Aldo Fabrizi, and the 2006 TV miniseries "La Freccia Nera" (The Black Arrow).


In addition to "Le Due Faccia di Dollaro" (The Two Faces of the Dollar - Brazil 1967) were filmed, "Gli fumavano le Colt ... lo chiamavano Camposanto" (Sartana Campesanto - Brazil 1971, They Call Him Cemetery) among the scenes, the final scene with John Garko and William Berger, "Goodbye Sabata" ("Goodbye Sabata" – 1970 Adios, Sabata) with Yul Brynner and Dean Reed, "Joe ... Close to a Poste Per Morire" (Find a Place to Die) with Jeffrey Hunter and Pascale Petiti among several other westerns and several other European films of several other genres and even some American films. Another highlight is the reading of Antonino Turano's book, "The Last Years of Monterano." (Gli ultimi anni di Monterano). A tale of the last hundred years of the village accompanied by various artistic and historical reconstructions. 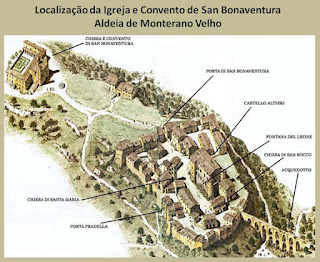 Thanks to Edelzio Sanches for allowing me to re-print hi well researched article from his wonderful Brazilian website https://bangbangitaliana.blogspot.com/2015/10/locacoes-espaghetti-western-igreja-e_14.html?fbclid=IwAR2-s40bWX3PavDPRMciI2XvrwhsETisOdscOoVKMRaduLAy1_6t8_Bjr7A

Thanks also to all the Brazilian fans and friends who read and support my blog and our continued love of the Euro-western genre and all its participants. Gracias amigos! 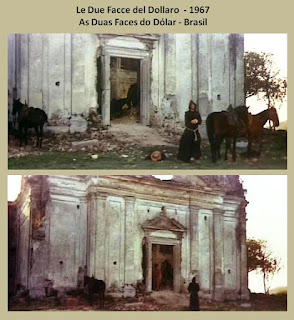 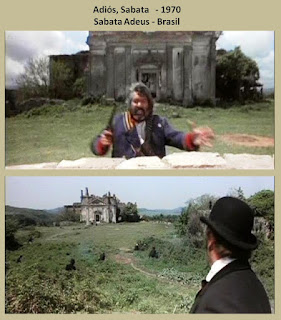 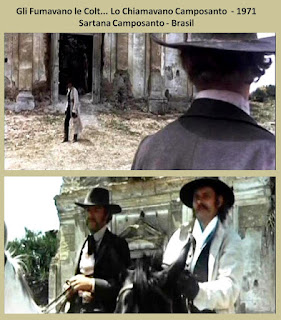 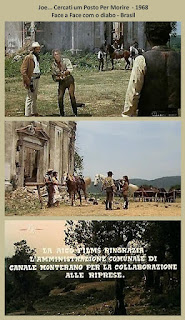