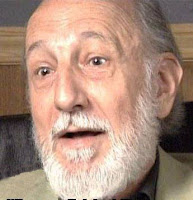 The National Association of Interpreters (ANDI) informed through its social networks that the Spanish actor Eduardo MacGregor died on December 16, 2018. The actor developed his career in Mexico as a dubbing actor in productions such as Oz, El Poder , Carancho and El Álamo.  He also ventured into films such as The Stone Book (1969), Christ 70 (1970), Blue Demon, Spies Destroyer (1968), The World of the Dead (1970) and The Jeremias (2015). This actor also worked with director Luis Buñuel , in Simón en el Desierto , in which Silvia Pinal, Enrique Álvarez Félix and Claudio Book also participated in 1965. MacGregor played Judge Thompson in 1995’s Euro-western “Sons of Trinity”.
Posted by Tom B. at 3:11 PM