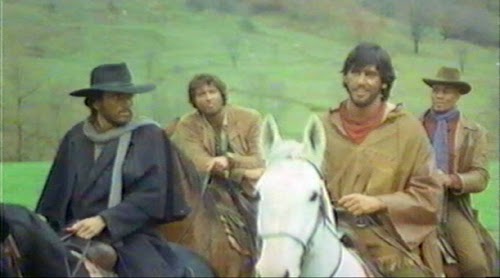 An asylum is set ablaze to cover up a bank robbery and several inmates die in the fire. Four of the inmates manage to escape and one of the four, an amnesiac young man, is recognized by a mortally wounded bank robber, who utters the name of “Ciakmull”, but passes away before he can give any further information. With the three other escaped convicts, Ciakmull (Chuck Mool) tries to put the pieces to this jigsaw puzzle and the events leading to his memory loss and incarceration at the asylum. When they arrive in a small village, he is recognized by a young man who tells him he is his brother. Apparently Ciakmull had a reputation as a great gunman, and his ‘brother’ now asks him to confront the local tyrant, Joe Caldwell, who is known to visit the local graveyard every night. Visiting the churchyard at night, he learns the so-called tyrant is his own father. Thanks to one of Ciakmull’s friends a killing is prevented, but the fatality of the play is respected in a dramatic ending, which turns Ciakmull into the bastard son who was brought into the family by his foster father. Things escalate from there and end in a grand scale gunfight.