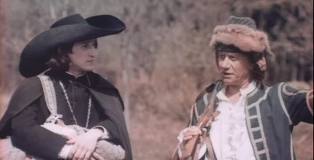 In 1758, young Mabel Duncan, the 16-year-old daughter of a British sergeant has come to be with her father at the British fort on the banks of Lake Ontario. She is embroiled in a complicated intriguing adventure engineered by the French scout Sangli. In addition, the girl faces another danger - she is kidnapped by the Seneca tribe to divert the garrison stationed at the fort. Standing in their their way is a young hunter, known as Pathfinder. He is in love with Mabel, and ready to defend her at all costs.