We continue with locations for “A Taste for Killing”. We next see Fellows looking at a wanted poster of Gus Kennebeck. He asks a man what it says. The man tells him it’s a wanted poster for Kennebeck. The man turns out to be Gus’ brother who is living in Omaha City under a different name because he feels disgraced by his outlaw brother. Gus pays a visit on his brother’s home and tortures his brother into telling him about the gold shipment from the Collins mines to the Omaha bank. Kennebeck takes his brother’s wife so he won’t tell the sheriff of his plans and then rides to his hideout to leave the woman and round up his gang.

The location of the hideout is called Cortijo del Monsul and is located outside San Jose, Spain on the same road that you take to visit Pozo de los Frailes. This location was also used in Johnny Yuma and several other films. Today it is empty and used as a goat corral. Beware as this is private property owned by the owner of Cortijo el Sotillo. Check there for permission to visit the locations. 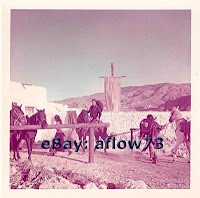