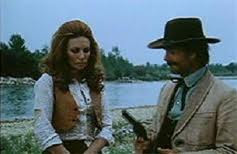 Two thugs: a disbarred Dr. Janus and an Irishman named Donovan, an expert in safes, empty the coffers of a bank. With the help of a Mexican bandit names Carrasco and gang, they flee with the loot. Ending up in jail with Dog, Carrasco's brother Janus is called to operate on him for appendicitis. The doctor forces him to reveal where he hid the stolen gold in the bank. Now riding to the place indicated, Janus meets the son of Donovan, Lou, from whom he learns that the Irishman died in a shootout with the law. Realizing that he was deceived by Dog, the doctor catches the bandit, during his transfer to the prison in Louisville. Janus intends to use Dog to blackmail Carrasco. Committed to the custody of Lou, Dog manages to free himself, but is killed by mistake by one of the other bandits. Finding Carrasco, Janus discovers that the Mexican was actually a woman named Deborah, who fled taking with them all the gold. Carrasco had sided with the doctor and Lou they chase Deborah, upon reaching her they are too late, the gold has been handed over in the meantime to a few peons. The three are then arrested and put in jail, thanks to a false accusation by Deborah. A few years later, we find them busy robbing a banker, but this time the woman, the wife of their victim, is unable to take the risk of ruining their second attempt to obtain gold.