I originally started this article as a general commentary on the phasing-out of hats as a common fashion accessory from our culture, but, once I got to typing and surveying pictures, the subject material expanded to such proportions, that I had to limit this article to only one aspect: the artistic significance of hats in the spaghetti western.

In the movies and TV shows I watched while growing up in the ‘60's and '70's, it seemed everyone wore a hat. Which is explainable by the fact that, back then, before cable, many of the old black-and-white films were still circulating on network television and westerns were still a popular genre of movie and television shows.

I remember thinking how awesome some of the hats were and how they added to a character's dimension of good or evil, or just how cool they looked. I wanted many of those hats!

And in no movie or television genre was the hat so important to the screenplay, itself, than the Spaghetti Western. Who can imagine a young Clint Eastwood without his rough-and-tumble brown fedora in the movie genre that made him famous? Or the quintessential western bad-ass, Lee Van Cleef (my favorite western actor) without his flat-brimmed black felt hat?

The hat in the Spaghetti Western was used to great effect in shading and perspective and the highlighting of the eyes, which was a staple of spaghetti western cinematography, and added an intensity of emotion not found in earlier westerns. The hat, the eyes, and the Ennio Morricone musical score revolutionized an entire movie genre.

Here are a few examples of how the hat draws the focus on the characters' eyes, which intensifies the affect... 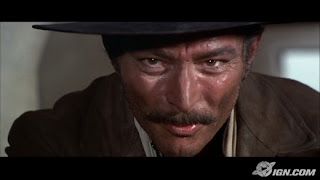 Without the hat in this movie still from the The Good, the Bad and the Ugly, we're left with a balding Lee Van Cleef, which isn't nearly as menacing. Ironically, yet, oddly befitting, his character was called "Angel Eyes" in this movie. 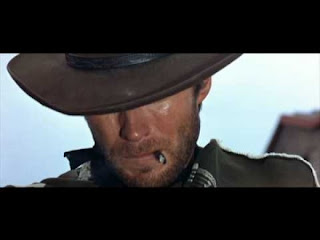 Here, the hat is barely shielding Clint Eastwood's eyes; building suspense as the audience anticipates his reaction to the local ruffians who are taunting him in Fistful of Dollars. 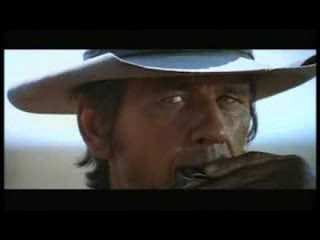 In this scene from Once Upon a Time in the West, Harmonica, played by Charles Bronson, begins his usual a-rhythmic blowing into his harmonica just before a gunfight. The hat perfectly frames his beady, deep-set eyes and his facial expression.

Here, the character played by Jack Elam waits with his outlaws to ambush Harmonica(Bronson) at a train station in Once Upon a Time in the West. Notice how his facial stubble prevents his flesh from almost blending-in with the wood of the bench while the dark of his hat frames the entire scene.

Here, the sternness of another outlaw's face is framed to great affect by his black fedora in Once Upon a Time in the West. 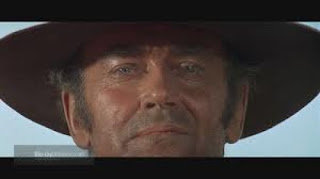 Who knew that Henry Fonda could look so threatening? As he is here, going against type-cast, in the role of the ruthless villain, Frank, in Once Upon a Time in the West. Without that dark, wide, hat overshadowing his menacing stare, I don't think he pulls-it-off.


I could continue with more examples, and it would be fun, but, you get the picture (pardon the pun). And I've already taken up enough of your time.