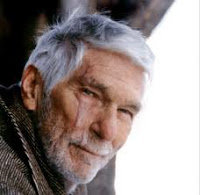 Justice Ellis McQueen, Jr. was born on August 19, 1927 in Beaumont, Texas. The tall, sandy haired, mustachioed actor adopted the name of the character he portrayed in his first film, “Battle Cry” (1955). LQ Jones, with his craggy, gaunt looks, first appeared in minor character roles in plenty of WWII films including “The Young Lions” and the “The Naked and the Dead” (both 1958). However in 1962 he teamed up with maverick director Sam Peckinpah for the first of Jones' five appearances in Sam’s films. “Ride the High Country” (1962) saw Jones play one of the lowlife Hammond brothers. Next he appeared alongside Charlton Heston in “Major Dundee” (1965), than Peckinpah cast him, along with his real-life friend Strother Martin, as one of the scummy, murderous bounty hunters in “The Wild Bunch” (1969). Such was the chemistry between Jones and Martin that Peckinpah teamed them again the following year in “The Ballad of Cable Hogue” (1970), and Jones' final appearance in a Peckinpah film was in another western, “Pat Garrett & Billy the Kid” (1973). Two years later Jones directed the cult post-apocalyptic film “A Boy and His Dog” (1975) starring a young Don Johnson. He has continued to work in Hollywood, and as the lines on his craggy face have deepened, he turns up more frequently as crusty old westerners, especially in multiple TV guest spots. He turned in an interesting performance as a seemingly good ol' boy Nevada cowboy who was actually a powerful behind-the-scenes player in state politics who leaned on Robert De Niro's Las Vegas mob gambler in Martin Scorsese's violent and powerful “Casino” (1995). LQ appeared in only one Euro-western: “The Hunting Party” (1971) as Hog Warren. Today we celebrate LQ Jones 85th birthday.