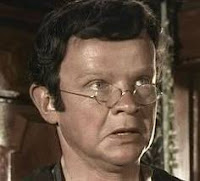 Kurt E. Zips was born on August 3, 1922 in Vienna, Austria. From 1943 to 1945 Zips was a member of the Vienna Burgtheater. Kurt appeared in numerous films and TV productions starting in 1949, mostly humorous characters, such as in “Pippi Longstocking Langstrumpf auf der Walze”, “Graf Yoster gibt sich die Ehre” ( both 1970), the miniseries “Die Powenzbande” (1973) with Gustav Knuth and also “Zwei himmlische Töchter” (1978) with Ingrid Steeger. Zips appeared in one Euro-western in a cameo appearance as the El Paso hotel owner in “For a Few Dollars More” (1965).

Zips' high, squeaky voice often made him a sought-after voice actor, however he was mainly earmarked for roles in animated films, for example, Alexander die Maus in “Die Biene Maja”, Ulme in “Wickie und die starken Männer”, Dr. Bunsen Honeydew in the Muppet Show or as Elmer Fudd in Bugs Bunny cartoons. Zips died in Munich, Bavaria, Germany on August 24, 1988. He was only 66.

Today we remember Kurt Zips on what would have been his 90th birthday.