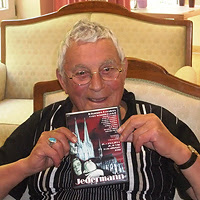 Alfred Beeh was born on June 16, 1927 in Augsburg, Bavaria, Germany. As Fred Alexander he made ​​his debut as a stage actor in Bochum, but later worked mainly on stages around the former East Germany in Frankfurt (Oder), Halle, Leipzig and Berlin's popular stage. In parallel, he also appeared in national film and television productions and DEFA German Television as "Carl von Ossietzky" (1963) and international productions such as "The Liberation of Prague" (Osvobození Prahy, 1976). On East German television, he was primarily as the voice of the heavenly messenger, "Arthur, the Angel," a successful well known Hungarian cartoon series. He was also host of the DFF music show "Love, Roses and Champagne." The children of the last East German generation in the 1980s, he was a peaceful old man, in which role he occasionally appeared in the evening greeting and retelling stories using puppets and well known fairy tales. With Germany’s reunification, he continued his career as a theater actor on stage in Stuttgart, Hannover and Frankfurt / Main. Alexander appeared in two East German westerns: “Tecumseh” (1972) and “Death for Zapata” (1979). Fred was also the German voice of Guido Lollobrigida in 1967’s “A Man, His Pride, a Vengeance”. Today we celebrate Fred Alexander’s 85th birthday.