MAN IN THE WILDERNESS 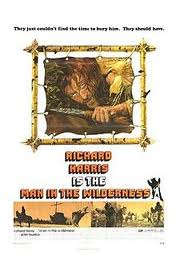 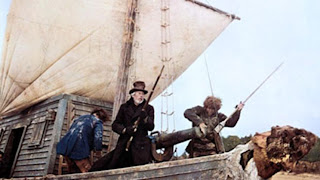 The fundamental theme of the story is the spiritual redemption of an emotionally damaged man, Zachary ‘Zach’ Bass. By using flashbacks to his childhood, the director provides the viewer the basis for Bass's emotional damage brought about by abandonment by his father and abuse by his schoolmaster.

Zach Bass is travelling with a trapping party in the Northwest Territory of the United States. Winter has come early and the group led by Captain Henry has found themselves frozen in and must pull their boat overland. While out hunting for food Bass is severely mauled by a grizzly bear. Believing he cannot live Henry tells two of his men to stay with Bass and bury him when he dies. The rest of the part leave and after three days the two trappers left behind decide it is too dangerous to remain any longer and abandoned their fellow trapper. Bass does not die but gradually recovers with his motive for survival revealed to be driven by many things, including revenge against Captain Henry, and the desire to see his young son, whom he left to be raised by his mother-in-law after his wife's death in childbirth. As it turns out, one of his comrades left a pocket Bible with Bass. It is this Bible that transforms and redeems Bass so that when he finally confronts his fellow trappers and Captain Henry, it is no longer the same hardened man that they meet. Rather, Bass has become transformed into a rational and forgiving man with no anger left in his heart.