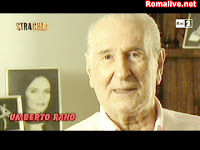 Umberto Raho was born in Bari, Italy on June 4, 1922. His main activities in the world of cinema were that of a character and supporting actor. One of his most interesting works included working with Dino Risi for making the film “Una vita difficile” (1961). Raho acted under various aliases such as Raoul H. Newman, Raul H. Newman, Bert Raho, Humi Raho, Umburto Raho, Umi Raho, Umy Raho, Bob Rains, Robert Rains, Umbert Rau during his career which 1948 until 1997 appearing in over 120 films and television appearances, among which were 12 Euro-westerns from “Twins from Texas” in 1964 to “Drummer of Vengeance” in 1971. Today we celebrate Umberto Raho’s 90th birthday.