Who Are Those Guys? - Florencio Amarilla 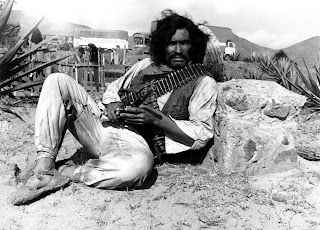 He was born Florencio Amarilla Lacasa on January 3, 1935 in Coronel Bogado, Paraguay. Amarilla became a striker for the Paraguayan National Soccer Team which played against Sweden in the 1958 World Cup. He scored two goals in that game which brought him to the attention of the Real Oviedo team of Spain where he signed a contract and played for them from 1958-1961. He then played for Elch CF from 1961-1962 before finishing his career with Almeria CD from 1967-1968. Here he lived and retired from soccer.

Living in Almeria brought him to the attention of film producers and he became a semi- regular during the Spaghetti western era usually playing Mexicans and Indians. He appeared as Aguila in “El Condor” (1970) and as Little Bear along with his son Luis in “Chato's Land” (1973). Florencio later returned to coach many of the top teams in the province of Almeria. He left coaching after a serious illness and suffered a stroke but after several months of rehabilitation he recovered but still has to use a cane to assist him in walking. On December 27, 2009 Florencio was honored at the Juan Rojas Stadium in Almeria by the Almeria Football Federation for his years of dedication to the sport of soccer both as a player and coach.