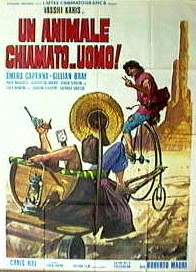 
This comedy western is one of the worst of the genre, which is really saying something. It’s another Trinity rip-off, where two drifters Bill and Johnny, arrive in the town of Silver City, which is run by Mark Forrester and his gangsters. Our heroes try and compete with Forrester and Bill even beats him in a shooting contest, winning $500 and the admiration of Yvette, a doctor from Paris. Bill and Johnny then pose as tax collectors and try and con the townspeople out of their hard earned money. They end up getting rid of Forrester and his gang and are given a huge reward by the town but being the con-men they are they decide to move on with Yvette. This film is so bad that Craig Hill left in the middle of it so Mauri cover’s it up by having the screenplay make that he was assassinated. You’ll also want to stop watching and leave this mess about 15 minutes into the film.