We continue our search for filming locations of “A Bullet for the General”. During the celebration for the liberation of San Miguel, Bill goes and talks with Adelita and tells her he is leaving. Adelita also wants to marry Pepito get her money and leave but Bill convinces her that El Chuncho will not leave as he likes the cheers of the people to fighting the revolution. 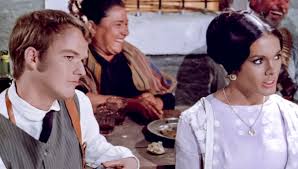