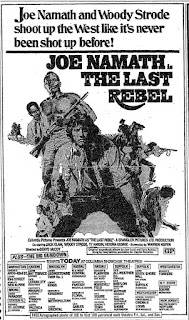 Two former football stars who have made something of a success on the screen now contribute to the success of a third, in the same medium. The comparative newcomer is Joe Namath, and the film is Columbia Pictures “The Last Rebel.” Helping Namath are Woody Strode, formerly of UCLA, the Los Angeles Rams and the Calgary Stampeders, and Ty Hardin, formerly of a Texas A&M team that was rated second in the nation.

Also starred in “The Lat Rebel” is Jack Elam and Victoria George.

“The Last Rebel” is the story of two Confderate soldiers, at loose ends just as the Civil War is ending. The save a black Union soldier from a lynch mob, and the three end up in a small Western town among whose more important citizens are a tough sheriff and the belle of the local bordello.

Namath and Elam play the men in gray, Strode is the man they rescue and with who they team up. Hardin appears as the sheriff and Miss George, the brothel beauty.

Victoria George, who plays a frontier madam in the post-Civil War west, in “The Last Rebel,” was born in New York City of a Russian mother and Sicilian father. She considers Los Angeles her home although for two years she has lived in a nine-room flat in Rome with her two children, two cats, two turtles and a school of fish.

Vicky began her career as model on the West Coast. Her first modeling job was for a Californian Gas Company billboard which announced “Smart Women Cook With Gas!” a statement Vicky had difficulty believing because she feels that truly smart women don’t cook. She subsequently did TV commercials.

Her first film role was in Howard Hawks “El Dorado.” This led to other film and TV work in “Twelve O’Clock High”, “Green Hornet,” “Lost in Space,” “Time Tunnel,” “Star Trek,” “Run for Your Life,” “The F.B.I.” and a number of comedy series.

Working with Joe Namath, Vicky was surprised that his on-camera blushed during the love scenes were real. After all, she had heard of Joe’s reputation. About Joe, Vicky said: “He’s a nice guy. He’s got sex appeal though he’s not beautiful, God knows, but it’s all there. And he looks great in “The Last Reel.”

Joe Namath, the football player who became known as “Broadway Joe,” played a cameo role in “Norwood,” and then starred in with Ann-Margaret in “C.C. and Co.,” for which he had to learn how to ride a motorcycle. For “The Last Rebel,” Namath had to learn how to ride a horse and how to handle a gun, two invaluable requirements for anyone tackling a Western-action role. Ex-football players Woody Strode and Ty Hardin helped Namath.

All-American for two years straight when he played for the University of Alabama, Namath was signed the New York Jets on a then unprecedented $400,000 contract and led them to the American League Championship and a brilliant upset victory over the Baltimore Colts in a Super Bowl game, New Year’s Day 1969. A bachelor, Namath acquired his “Broadway Joe” nickname and a considerable amount of publicity, by his unabashed interest in tall, swinging ladies.

Jack Elam, veteran screen and television character actor who play’s Namath’s Confederate Army buddy, came into motion pictures by way of the business office. A CPA who ultimately up as auditor of the Samuel Goldwyn Studios and business manager for Hopalong Cassidy Pictures, Elam turned actor in 1949. Among his 120-odd films have been “Rawhide,” “Kansas City Confidential,” “Rio Lobo,” “Dirty Dingus Magee,” “The Cockeyed Cowboys of Calico County.” On television he was the sheriff on “Temple Houston,” and a regular on “The Dakotas.”

Woody Strode, who starred as an end at UCLA with Kenny Washington and Jackie Robinson and his teammates, later played for the Los Angeles Rams and the Calgary Stampeders. From there he moved into professional wrestling, became a Hollywood stunt man, and finally an actor. Among his films have been “Pork Chop Hill,” “The Ten Commandments,” “Spartacus,” “The Sins of Rachel Cade,” “Sergeant Rutledge,” “The Man Who Shot Liberty Valance,” “Two Rode Together,” “Shalako” and “Che”. He was one of “The Professionals,” along with Burt Lancaster, Lee Marvin and Robert Ryan, and he played the role of Jesus Christ in Valerie Zurlini’s “Seated at His Right Hand.”