After 50 years, “Trinity is STILL My Name”

After 50 years, “Trinity is STILL My Name” The masterpiece, produced by Italo Zingarelli, could return to Lugo half a century after the world premiere of October 21, 1971 at the Astra Cinema

It was October 21, 1971 when the sequel to one of the greatest successes of Italian cinema was presented at a world premiere in Lugo, at the former Astra Cinema. It was the film “Trinity is STILL My Name”, released one year after that first "They Called Me Trinity", which I enliven and at the same time consecrate the historical couple formed by Terence Hill and Bud Spencer. The choice fell on Lugo because in the city, on January 15, 1930, the producer of both films was born, Italo Zingarelli who, despite successes and spotlights, always kept alive the relationship with his native land. The rediscovery of bond and the epic event that in 1971 also brought Bud Spencer and their guests to the world premiere, thanks to Matteo Penazzi and Giovanni Sali from Lugho.

Last year the two founded the Cineclub dedicated to Zingarelli, who passed away in 2000, framing him among the many activated by the Lugo Music Festival. “I'm passionate about cinema and the couple formed by Spencer and Hill - explains Sali, a professional designer -. And I came across the legendary figure Zingarelli”. From there, the idea was to divulge what was discovered and to involve the city as well, in collaboration with the Lugo Music Festival, chaired by the musician Matteo Penazzi. "We intend to remember the most important dates and anniversaries linked to Zingarelli's activities - explains Sali and Penazzi -. It is a new offer for Lugo and for the territory, Zingarelli had the courage to produce the film proposed by Barboni (They Called Me Trinty) at a time when the western genre was in decline. Moreover - they continue - it was a parody, making the gamble even greater.

[Bud Spencer on the left and Italo Zingarelli on the set]

Spencer and Hill, who were linked to Zingarelli by contract, the producer decided to entrust them as the leading actors of the films: “In that way - underline Sali and Penazzi - he deserves the credit for the choice of the couple”. The two actors will then return to work with Zingarelli in 1979 and “I'm For the Hippopotamus”. The debut of the many initiatives that have taken and will take shape around the figure of the producer from Lugo, took place last summer with the screening organized at the Arena del Carmine to commemorate the 50th anniversary of 'They Called Me Trinity', in the presence of the journalist Lis Bernardini and the director, writer and screenwriter Marco Tullio Barboni, son of the director Enzo Barboni. For 2021, there are two projects that the Cineclub intends to carry out. “After various investigations carried out involving the family, we managed to find Italo Zingarelli's birthplace, in via Garibaldi, near the center - say Penazzi and Sali, supported in their activities by four other members of the film clubs -. We would like to affix a commemorative plaque to it. The children are available to be present at the ceremony, enthusiastic that someone in Lugo remembers their father, who has always been linked to his city, so much so that he often talked about it in his meetings with the greats of cinema of the time, from Monicelli, to Leone, to Loren to Wertmuller". 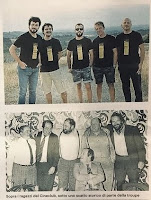 [Top photo is of the boys of the Cineclub, the bottom photo is part of the crew]

The second project, on the other hand, concerns the 50th anniversary of the world premiere of “Trinity is STILL My Name” with the objective of: "Organizing its screening - Sali and Penzaazi conclude -, also with the help of Terence Hill's manager. We are also in talks with Oliver Onions (Guido and Maurizio De Angelis), to whom the soundtrack belongs. We hope to have them among the guests”.