The Pale-eyed cowboy is an elite killer 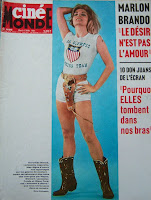 In this series of articles for Cinémonde entitled - the Western Giants - we now present to you an actor who is unknown in France. Still, he is a - giant - not just because he measures 1 m 98 [six-feet four inches], and but because he is the hero of - For a Fistful of Dollars - a western that currently is breaking all box-office records in Italy. This success is so big that Clint Eastwood's single appearance in a film has him back in Rome where he is making his second Italian western [For a Few Dollars More started filming in April of 1965].

When Clint Eastwood, as Texas Joe - in the film - For a Fistful of Dollars - makes his entrance in San Miguel, he serves as vigilante taking on two great rival families, the Rojos and the Morales [Baxters, which would have made Mexican against Mexican] who control the town, because in San Miguel terror reigns over the inhabitants, and only two sides remain: the wealthy and the dead.

He sides first with the Rojos and then the Morales [Baxter], and he plays the two sides against each. The stoic American, Texas Joe continues this game, until the day he is caught and beaten, when youngest of the Rojo brothers discovers his double cross.

In truth Joe has only one goal: to set the two families upon each other and have them kill each other off. The Californian actor Clint Eastwood is used to this kind of exercise, because although he is little known in Europe, he is the typical western actor - having been the number one American Television cow-boy for 6 years, as the co-star of the series - Rawhide - whose famous composer Dimitri Tiomkin wrote music.

Clint was chosen by Italian director Sergio Leone, and it was here in Europe that he made his first [lead] film for the cinema. When he first arrived in Italy, he was fully prepared having landed with all his gear and cowboy paraphernalia that he used on - Rawhide - (saddle, boots, solid silver spurs, old hat, leather belts, [pants] etc).

The pale green eyes, blond unruly crazy hair, adds a distinctive allure to one who is accustomed, to walking with[out] his feet in spurs. The growth of facial hair was needed for the role and his nonchalant manner also added to his character's legend, and he was soon baptized the most handsome American cowboy [before he was christened the Man with No Name].

Contract offers have begun to rain in, because Italian filmmakers are now moving towards the western for the foreseeable time. Clint is the most ideal actor that this genre can ever dream of. Besides, he is also a talented singer and an accomplished sportsman. He has a predilection for racing cars, playing golf and swimming, which helped save his life following a light plane crash in the Pacific, where he had to swim for seven kilometers to the beach shore. His life is that of a real cowboy: alongside his wife Maggie (ex-model turned tennis enthusiast), at the ranch, in the hills of Sherman Oaks, California, with their friends: assorted parakeets, a Siamese cat, dogs and a turtle.

- For a Fistful of Dollars - is actually not a movie for stars, but a film for actors - which has a cast of Germans Marianne Koch - Siegfried Rupp, Italians Gian Maria Volonte and Luigi Giuliani [Giuliani was announced in January 1964, and presumably replaced by Bruno Carotenuto?, & Miss Gerald's research included some out-of-date info] and a number of Spaniards Antonio Prieto, Margherita Lozzano and Daniel Martin, playing off of Clint Eastwood.

This new - Duel in the Sun - or better still - A Sacrificial Lamb in the Sun - does not lack humor, because Sergio Leone, who seems to dream of making a career along the likes of director Ernst Lubitsch, can handle both satire and parody. Besides Clint Eastwood often spits fire when he blinks. 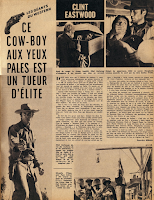