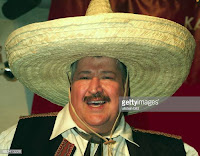 Film, TV and voice actor died in Goslar, Germany on August 26, 2019  He was 78. Kraus was also been heard in radio plays, audiobooks and computer games and has appeared as a reciter and cabaret artist. He has a well-known television role as neighbor Hermann Paschulke since 1981 in the television series Dandelion. Krauss took over the narrator role from 2000 to 2003 at the Karl May Play at Bad Segeberg. Born in Augsburg, Bavaria, Germany on June 11, 1941, in 2005 Krauss played the role of the host Don Geronimo in the play Winnetou and the Secret of the Felsenburg, in which he also told the story. Since the 2014 season, he had been working as a narrator at the Freilichtbühne in Burgrieden, where he now accompanies the pieces directed by Karl May with his distinctive voice.
Posted by Tom B. at 12:48 PM