Who Are Those Composers? ~ Willy Mattes 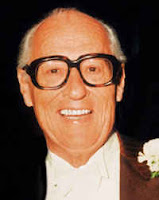 Wilhelm Franz Josef ‘Willy” Mattes was born in Vienna, Austria-Hungary on January 14, 1916. After completion of the Matura in 1935 and the conducting class of Felix Weingartner at the Music Academy in 1937 in Vienna, Mattes was until 1939, theater conductor in Oldenburg and Leipzig . He then worked as an arranger and composer for the film companies Ufa and Tobis, for which he wrote his first independent film scores in addition to his duties as assistant to Lothar Brühne. He also conducted and arranged recordings for record companies and worked for the German Dance and Entertainment Orchestra in Prague.

From 1944 to 1951 Mattes was employed as a conductor at Sveriges Radio in Stockholm, then at the Bavarian Radio in Munich and from 1964 to 1974 at the South German Radio in Stuttgart. From 1960-1961 he worked together with Walter Felsenstein on the new version of the Millöcker opera Poor Jonathan. His most famous individual work is the concert piece for piano and orchestra Swedish Rhapsody, which was played by all major orchestras in the United States, where it received several recordings and was used in the 1966 MGM film Madame X. In the credits, he used the pseudonym Charles Wildman, which he occasionally used in international film work. From 1975 to 1980 he held the departmental post for U-music at the RIAS in Berlin. Since 1981 he was guest conductor at Norddeutscher Rundfunk in Hannover.