Almeria is again the queen of film shoots in the country

After Madrid and Barcelona, Almería is the province that accumulates more shootings (more than half a thousand), although the size of these is surely more relevant. 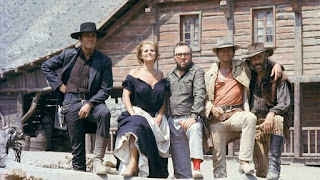 [Henry Fonda, Claudia Cardinale, Sergio Leone, Charles Bronson and Jason Robards in the filming of “Once Upon a Time in the West”.]

In 2013, 24 years had passed in which Almeria had lost its international film splendor. And then, a quarter of a century after Indiana Jones and Steven Spierlberg's last crusade, Ridley Scott arrived with Exodus. And since then, the province has again aroused the interest of world-class shootings. “The Last Terminator”, scenes from the “Game of Thrones” TV series, “The Rythm Section” or the mythical Brian de Palma with “Domino” (but there are many more) set their sights on different places in the province to be essential elements of their productions.

But the history of cinema in Almeria dates back to the fifties, although it was in the sixties when it began to live its golden age (and that will be difficult to match). It speaks of “El Cid”, starring Charlton Heston and Sofia Loren in 1961, as the first major shoot in the province. Shortly after, and here there is some controversy in this regard, “Cleopatra” is located (in 1963), although according to testimonies of the time, there is no reference to the arrival of Elizabeth Taylor for such filming, although it is possible that a unit was moved to sign a secondary scene of the movie. 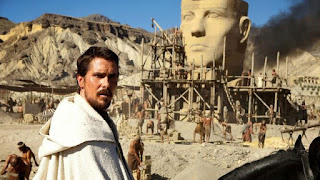 [Christian Bale during the filming of Exodus by Ridley Scott.]

Since then there are more than half a thousand films and series that attest to the rich
cinematographic heritage of the province. This vast history is exquisitely reflected in the book Cabalgando hacia la aventura. Almería y la industria del cine, by the film researcher José Enrique Martínez, where in several chapters, through the different genres a great review is made of the shootings made in Almería from 1951 to the present. In 1951 the first shooting of a feature film was produced in Almería. “From that date on, the fifties are tested for all kinds of productions, preparing what would be an incredible avalanche years later. A perennial sun, exceptional temperatures and a very peculiar and varied landscape were the key. At the time of the sixties it was when the industry really took shape and great productions began in Spain and Italy, with great means and an exceptional workforce, cheap though. There were the productions of Samuel Bronston and other great films, which highlights the wonderful and exceptional work of English genius David Lean, “Lawrence of Arabia”, Martínez Moya told this newspaper.

THE DESERT AND BEACHES WERE CHOSEN FOR BLOCKBUSTERS, ALTHOUGH IN RECENT YEARS OTHER MONUMENTAL ELEMENTS SUCH AS THE ALCAZABA ENTERED

Following the cinematographic explosion of the province, according to the prestigious IMDb website, in Almería more than 300 productions between films and series would have been shot, but in reality many national productions and series that have had one or several scenes within Almeria landscapes. What is certain is that Almería is together with Malaga after Barcelona and Madrid, the province in which more productions have been made.

It is impossible to forget “Once Upon a Time in the West”. One of the western jewels filmed in the province with actors such as Claudia Cardinale, Charles Bronson and Henry Fonda. In 2018, 50 years of filming were completed. The budget of the film was around five million dollars, of which half went to pay the actors who participated in the shooting.

“Once Upon a Time in the West” tells the story of Brett McBain, a widowed farmer who lives with his children in the poor area of ​​the American West. He has prepared a welcome party for Jill, his future wife, but when she arrives she discovers that McBain and his children have been killed.

Quentin Tarantino has never hidden his veneration for the stories of Sergio Leone, but in addition to the fan club of “Once Upon a Time in the West”, Martin Scorsese, George Lucas and Steven Spielberg join. For their part, the Coen brothers have declared that this film is "the best western in history." It is impossible to forget other titles such as “Patton”, “Conan the Barbarian” or “How I Won the War”, with John Lennon's visit to Almeria during the fall of 1966.

Desert areas with a rugged landscape such as Tabernas, large mountains with lush vegetation, coasts, cliffs and the pristine beaches of Cabo de Gata-Níjar. There are not many Spanish provinces that can boast of having such a varied orography and, at the same time, such strong contrasts. That is what made Almeria one of the great centers of film production in the world and it certainly has not been by chance.

The capital of Almeria and the natural areas of the province hosted more than 70 cinematographic, audiovisual and photographic shoots during 2018, including a fortnight of feature films, including major international productions that have brought actresses such as Blake Lively, Gal Gadot aand Salma Hayek as well as renowned directors Emmy Reed and Patty Jenkins, among others.

During this year, the capital also hosted the filming of series such as ‘Bounty Hunters’, from the English chain SKY 1 and which took place in April in spaces such as Avenida del Mar, Pescadería neighborhood and Las Salinas in Cabo de Gata, or as ‘Hanna’, produced and distributed by NBC and Amazon TV, which was filmed during the month of May in the Port of Almeria and the intermodal station. Spanish cinema has also had its development in Almería with the recording of Los Nuestro 2, with Paula Echevarría and Rodolfo Sancho as protagonists.

In recent years, we must highlight the effort made by Almería Film Office and the Almeria Provincial Council to sell the tourist attractions of the province to attract productions.
Posted by Tom B. at 6:48 AM