The Latin American Film Festival pays tribute to a classic 'Spaghetti western' and first telenovela heartthrob actor at 90, will receive the award on Tuesday November 17, 2015.

The Latin American Film Festival awarded the prize "Ciudad de Huelva" to Venezuelan actor José Torres, who was honored during the 41st edition.  The Spaniard Belen Rueda and Aitana Sanchez-Gijon are the other stars honored at the show this year.

The Iberoamerican bases the award for Torres as one of the first Latin American actors who made films in Europe.  But his path took him beyond, being one of the regular performers in the Spaghetti westerns filmed in Almeria in the 1960s and early 1970s, and the story that stands out as a protagonist in one of the first Venezuelan television soap operas.

José Torres (Tocuyito, Venezuela, 1925) began his career as an actor on stage in the theater.  In school workshops his vocation was born, which later materialized in various theatrical productions. Although his first audiovisual appearance was in a soap opera ‘La criada de la granja’ (The Maid of the Farm), in 1953, and considered the first in soap opera in Venezuela.  It consisted of 15 minute episodes a day, broadcast live, but today few remember it in our country.

At the end of that decade he decided to try his luck in Europe and became interested in theater activity in Italy, from which he soon made ​​the leap to film, at the dawn of a particular gender, the Spaghetti western, the Italian version of those Western movies which glorified John Ford from the 1920s. 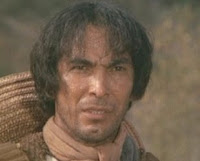 The Venezuelan actor was a direct participant during the emergence of these B series productions filmed in the deserts of Almería, Spain and had different leading roles over fifteen years that led him to share the stage with such actors as Orson Welles (in Tepepa, 1969), Lee Van Cliff, Terence Hill and Bud Spencer, among others, and directed by leaders of the genre like Sergio Sollima, Enzo Castellari and Giulio Petroni.

But it was not all horses, shooting and threadbare ponchos.  In a film by Pasquale Squitieri in 1960, “Yo y Dios” (I and God), his role as a Sicilian priest who faced the dilemma of celibacy earned him the most important role so far in his career and was the awarded best actor at the Neorealist Film Festival the Laceno d'Oro .

The European stage of his career concluded in the first half of the 1970s, with his return to Venezuela, where he also began an outstanding career on television, without leaving the cinema and theater.

However it was in 1995 when he lived his sweetest moment when the recognition and affection of all his country was won, with his interpretation of an indigenous, Tacupay, a minor character in the soap opera ‘Ka Ina’ he received devoted popularly for which he  is still remembered.

Jose Torres maintains personal ties to Spain, where he lived on the European stage and shot most of his films, not just Italy.  In Barcelona, ​​in fact, lives one of his sons, according to a note received yesterday.

The Venezuelan artist, at 90 years of age, will visit the Festival of Huelva for the first time to receive the tribute we render on Tuesday November 17th. The event was held on the stage of the Grand Theatre at 9:00 p.m. to receive one of three awards of the city of Huelva.