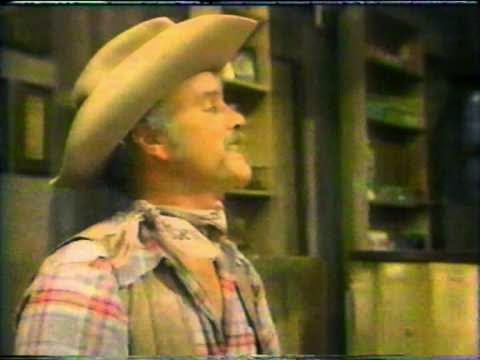 'Bootle Saddles', was a television series that poked gentle fun at British Wild West enthusiasts. Men from all walks of life - bank managers, salesmen, doctors - who choose to spend their weekends dressed as cowboys, pretending to shoot one another with toy Colt 45's.

“Set in 'Apache Wells', a Wild West theme park run by northerner Percy "Call me Jesse!" James, his wife and sexy daughter Betty, it featured a motley group of characters learning the ways of the Old West. The quality of the writing and acting was extremely good. Gordon Rollings made one of his final appearances as 'The Kid', an elderly man dressed in black who never spoke and walked around with a gun in one hand and ear trumpet in the other. A one-joke show perhaps, but a very funny one. The B.B.C. didn't seem to know what to do with it, and put it out on B.B.C.-2 where it was unjustly ignored. It deserved a far better reception” – Shade Grenade  from Ambrosia