THUNDER AT THE BORDER 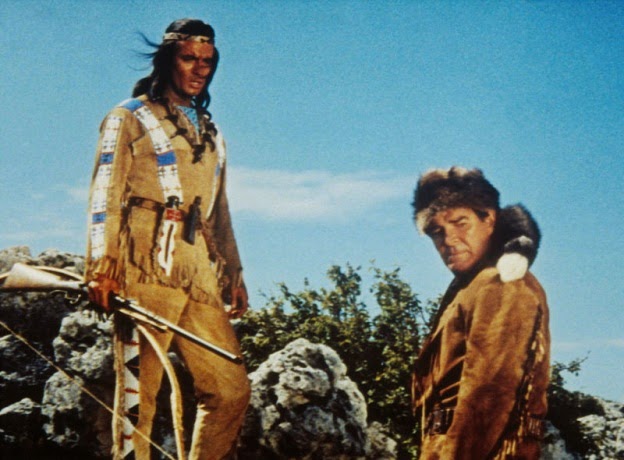 Winnetou and his sister Nscho-chi along with several warriors of the Apache tribe are ambushed by Siler and his gang of bandits. The Indians obtain help from trappers Jason Waade, who is known as Old Firehand, Tom and his friends, Caleb and Moses.

Winnetou and Old Firehand have been involved in other disputes with Silers. His brother Billy Bob is sitting in the local jail, and Seargent Mendozza is harassed by local residents of Maramonte to release him in order to escape the vengeance Silers. Firehand is moved to help defend the village, not of the least because he has there met his old love Michèle, who has a son Jace from him, but does not know that Old Firehand is his father. Michèle is being courted by the eccentric English gentleman Ravenhurst, but has not yet yielded to his charms.

After Billy Bob Siler has been killed while attempting to escape, Silers slaughters a covered wagon train with local residents for revenge. He loads a wagon with dynamite and sends it back to Miramonte where it explodes.

Winnetou leaves to seek help from the army but meets Capitano Quilvera with his Mexican bandits who sets a trap, which Winnetou barely escapes. Quilvera and Silers team up and attack the town together. A priest who confronts them with a raised cross is shot by Silers against Quilveras protest.

The inhabitants fight back under the leadership of Old Firehand, and the attackers back away slowly. Winnetou sends dynamite laden horses into the bandits and blows them into the air. The rest of the bandits are taken care of by the inhabitants of the town who with Old Fiorehand by a surprise attack against Siler and Capitano Quilvera. Firehand and Tom pursue the fleeing Silers, who is mortally wounded by Siler and dies. Firehand is of the opinion that a bullet would be a shame for Silers, so he uses Winnetou's bow and arrow, with which he then pins Silers to a tree trunk before shooting him.

YouTube trailer: http://www.youtube.com/watch?v=YKkoANdD9aQ
Posted by Tom B. at 5:48 AM