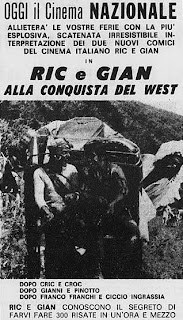 During the Civil War, a Yankee decides to buy a large number of horses, which are essential for its army. To protect the huge amount of money needed, it is decided to build two gold wheels and replace them with those on a coach lead by Captain Stuart, who is put in charge of the purchase from ranchers in the West. Unfortunately for the captain, however, the coach is led by Rick and John, two naive young men who do everything to make the trip more uncomfortable than expected, after selling the two wheels of gold to an Indian. The journey of care continues until it is halted by a group of Southerners. In order to keep the gold from falling into the hands of the enemies, Captain Stuart, who does not know of the sale to the Indians, blows up the coach, succeeding to flee with his two casual friends. During the return trip Rick and Gian meet the Indians again.