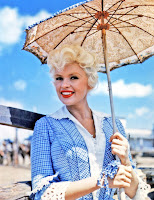 She was born Vera Jayne Palmer on April 19, 1933 in Bryn Mawr, Pennsylvania. Her father, Herbert Palmer, was an attorney, and her mother, Vera Palmer, was a retired schoolteacher. She gained fame as Jayne Mansfield and pin-up status after suffering wardrobe malfunctions in front of photographers.


Jayne Mansfield was 16 years old when she met a boy named Paul Mansfield at a Christmas party and immediately fell in love. They married just months later, in May of 1950, a few weeks before Mansfield graduated from Highland Park High School in Dallas. The Mansfields divorced in 1955.


Jayne was offered roles in several films such as “Kiss Them For Me” (1957), and “It Takes a Thief” (1960). After her divorce to Paul Mansfield, she married she married the winner of the Mr. Universe Competition, Miklós ‘Mickey’ Hargitay in 1958, and they had three children. However, theirs was a tumultuous relationship, and in 1964 Mansfield married actor Matt Cimber in Mexico, even though she had not yet officially divorced Hargitay. Mansfield and Cimber had one child before also parting ways. For the rest of her life, Mansfield was involved in a rocky relationship with Sam Brody, the attorney she hired to assist with her divorce proceedings.


Mansfield appeared in only one Euro-western, “The Sheriff of Fractured Jaw” (1958).


She experienced a career lull in the 1960s, though she did act in small roles on film and stage. Mansfield died in a car accident on June 29, 1967 at the age of 34. Her daughter, Mariska Hartigay, is a well-known and respected television actress.


Today we remember Jayne Mansfield on what would have been her 80th birthday.
Posted by Tom B. at 6:14 AM