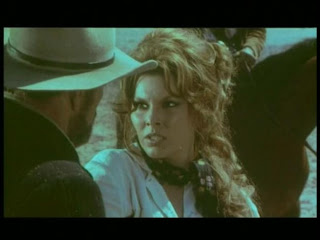 A half-breed named ShaRIko, arrives in a small town in the West controlled by the former Confederate soldier, Major Bower who lords over the town with violence. Shariko stands up to the threats and challenges of Bower’s henchmen. Sandy, Bowers wife, tells of a treasure in gold, she’s hidden where her greedy husband has not been able to discover it. Caught talking to each other, Bower captures then kills Sandy Shariko, tortured reveals where Bower’s wife said - where the gold is hidden. The owner of the saloon, Becker, and his daughter help Shariko escape with the agreement that they will receive in exchange fifty percent of the loot. Becker is killed by Bower, and Shariko recovers gold, hidden in a chair in the Major’s house. Having killed Pico, Bower’s right arm man, he is challenged to a duel by Bower. Regardless of the rules, Bower is arrives at the agreed to meeting place with his full gang, but Shariko, is able to exterminate them with guns and dynamite. Finally the two men confront each other face to face. Shariko, walks away with the gold but the bag has been pierced by a bullet and the contents end up being dispersed among the rocks as he rides away.