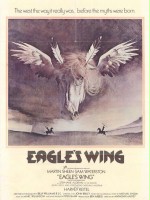 Pike, a young greenhorn trapper, who has deserted from the army teams up with Henry, a seasoned trapper. While packing up their traps the two are attacked and Henry is killed. Pike alone on the plains of New Mexico witnesses a duel between a group of Indians, one a chief riding a magnificent white horse named Eagle’s Wing. Pike manages to capture the horse but has it stolen from him by a lone Indian named White Bull. Pike pursues the horse and the thief.

A group of men from a local mission set out to search for the travelers. White Bull sets traps for the men by leaving a trail with the stolen jewels and they all die from the hidden traps. Pike fights White Bull on horseback and loses, even though both are wounded. The white man is no match on horseback for the Indian, even when he had a sword. White Bull goes back to his home with Pike's white stallion and leaves ‘The Widow’ behind.
Posted by Tom B. at 6:28 AM