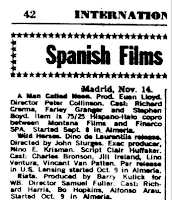 Original Deadly Trackers (working title “Riata”, began filming in Spain and shot for two weeks in November 1972. Harris and Fuller didn't get along so Warner Brothers pulled the plug and started looking for a new director. It took them six months to relocate to Mexico and start over with Barry Shear.

Warner Bros. which last fall halted shooting of Samuel Fuller’s “Riata” film project, has taken on Cinemobile Film Guarantors as a partner is resuming production and guaranteeing completion. When a mutually acceptable director to replace Fuller is set (possibly Barry Shear), the project will resume in Mexico. Also gone from the pic is co-star Alfonso Arau. WB will release the completed film.

In Mexico City late last week a spokeman for Cinemobile there said that Fouad Said (Cinemobile head) had spent a few days talking with National Film Bank director Rodolfo Echerverria and Churobusco Studios general manager Alejhandro Oretega Senvicente and arranged a co-production. Said alos had presented the screenplay to the Motion Picture Bureau for its approval.

About one-third of the film has been shot by Fuller, but most of it is likely to be scrapped. Ralph Serpe will produce the film. Richard Harris, Leslie Caron and Bo Hopkins head the cast. Filming may resume March 15.