We continue our search for film locations for “The Mercenary”. Paco and his band are then seen in a town pretending to be peons while spying on the Mexican army. Kowalski sits at a small table outside a café and keeps notes on the daily routine of the Mexican soldiers. As the trumpet player finishes blowing assembly he is shot by the Polack and Paco’s men go into action killing the other soldiers. With the machine gun they are able to kill the entire garrison. Paco then robs the bank of a large chest while his men free the prisoners from the jail, among which is Columba. She berates Paco and his men as nothing more than bandits. Paco tells the villagers the food in the warehouses belongs to them and then asks for volunteers to fight the revolution. They all scatter except Columba who asks to join Paco. Kowalski tells Paco and his men to remove the soldiers’ uniforms as he has an idea. 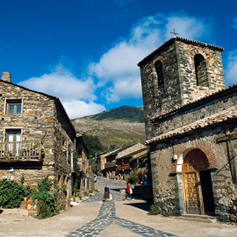