Who Are Those Guys? ~ Ioana Craciunescu 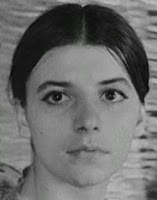 Ioana, also named Luminita, Crăciunescu, was born in Bucharest, the daughter of a civil engineer. She studied at the Caragiale Academy of Theatrical Arts and Cinematography in her native city and in 1973 became a member of the Nottara Theatre Company. She has published six volumes of collected poetry beginning with Duminica absentă (Sunday absent) in 1980 for which she won the Writers' Union of Romania Prize the following year.

She made her film debut in 1974 and achieved her first major success in 1979 as Ana Baciu in the film “Blestemul pământului, blestemul iubirii” (The Curse of the Land, the Curse of Love). In 1991, she went to France to continue her acting career, primarily as a stage actress. Fifteen years later, she returned to Romania for a brief period and since then has divided her time between the two countries.

In 2009, she received the Nichita Stănescu National Poetry Award from the Romanian Ministry of Culture.

The Prophet, the Gold and the Transylvanians – 1977 [as Ion Craciun]

The Actress, the Dollars and the Transylvanians – 1978 (pianist)

The Oil, the Baby and the Transylvanians – 1979 [as Ion Craciun]