Who Are Those Gals? ~ Susan Coyne 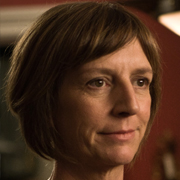 Helen Susan Cameron Coyne was born in Ontario, Canada on June 16, 1958. She is the daughter of James Elliott Coyne, a former governor of the Bank of Canada, the sister of journalist Andrew Coyne and the cousin of constitutional lawyer Deborah Coyne. She attended the St. John's-Ravenscourt School in Winnipeg, as did her acting colleague Martha Burns. In 2017 she was appointed a Member of the Order of Canada by the Governor General for her contributions to Canadian theatre, film and television as an actor and writer. She is a graduate of the National Theatre School of Canada.

Susan is a veteran of the Toronto theatre scene, she acted for several seasons at the Stratford Festival, was one of the founding members of the Soulpepper Theatre Company and is currently a playwright-in-residence at the Tarragon Theatre. Her two best-known plays are Kingfisher Days, an adaptation of her critically acclaimed memoir of the same name, and Alice's Affair. The edition of this memoir that was published in America was titled In the Kingdom of Fairies. It recounts her experiences in the summer of 1963 at her family's summer cottage on Lake of the Woods. She is also known for her translations of Anton Chekhov. Coyne also appeared in the Fernando Meirelles adaptation of the Jose Saramago novel, Blindness.

In 2006, she won two Gemini Awards for her work on ‘Slings & Arrows’, one for best performance in a supporting role and one for best writing for a dramatic series (shared with her fellow co-creators, Bob Martin and Mark McKinney). In 2007, she again won for writing, but lost to co-star Martha Burns in the acting category.

She wrote the screenplay for the 2017 film, “The Man Who Invented Christmas” starring Dan Stevens and Christopher Plummer. Other television writing credits include ”Mozart in the Jungle”, “The Best Laid Plans”, and L.M. Montgomery's “Anne of Green Gables”.