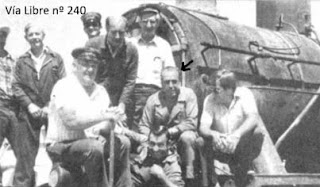 D. José García García began serving on the railway since May 1943 as a pawn of Via and debras in Palma del Río (Córdoba), after 5 years he arrives in Guadix, where he also passed through the categories of Peón Deposit, Auxiliary Stogoner, Stoker and finally a motorist since 1966, a position he held for eighteen years. The anecdote of how he became the driver of the ′′ Guadix ′′ is very curious, according to IDEAL it all began in 1966 when examined for a motorist and it was all the result of a coincidence. The 140-2054 replaced the diesel machine with which it was examined because it broke down halfway through, of the three aspirants it was up to him to take their controls on the journey between Huéneja and Almería. But there don't end coincidence, everyone acknowledged that Jose Garcia had a close resemblance to actor Humphrey Bogart, this can be seen in the images we post. From there he became the usual driver of the 140-2054 locomotive, learning all his details by heart and being companions on endless film tapes.

In the interview with the IDEAL newspaper, Jose claimed that ′′ today there are no machinists who can drive a steam engine and interpret everything the machinery goes saying on a journey ". He also said that ′′ if he could he would take a turn to Phones or anywhere with the locomotive. He knows her so well that he's not afraid to get back into his commandments ". However, for Jose, ′′ putting the machine in motion is a difficult project, repairing that steam engineers no longer exist or spare parts. The task of ruling a machine like this is complicated ", he says. He also warns of the care required by the machine and emphasizes especially ′′ the shutdown tasks, the need for water levels to be adequate and the cleaning especially of water conduits ".

He was famous among his teammates and neighbors in Guadix. This tanned engineer received the offer to participate in films where the train was somehow protagonist, or because there were scenes that unfolded in a convoy of old-time, dragged by steam locomotives. This is how he began to participate in extra films like ′′Armed Forces of Cuba", ′′Red Sun", ′′March or Die",

Many of the films were filmed in Burgos, Madrid, Malaga, Granada and Almería, where Don José was moving with his locomotive to take the planned sequences. Due to the amount of hours Jose spent on filming, he became very aware of the cinematic environment and this meant him to be able to gather many anecdotes, in addition to the pleasant times he lived alongside stellar front row characters.

His passing through theater allowed him to enjoy a 1.000 pesetas overload of before and if he went through another 1.000 additional pesetas. This is the story of José García García, the last engineer of the 140-2054 ′′ Guadix ′′, ending his professional bonding with the railway by retiring in the early 80. s. 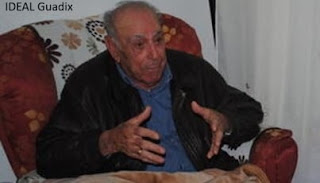 His last turnout on camera was made shortly before retirement and was to shoot an advertisement for an English beer called William Stones. These scenes were shot in Gor, which was renamed the name ′′ Halipur ", as it was about giving the short atmosphere of ′′ Far West ". From that shoot, his wife, Maruja Lopez, guards a treasure a can from the beer he took to his house to try it, but which was incorporated into the memory gallery.

The last thing I could find out about José García is the interview they published on March 2, 2014 in the Ideal Diary of Guadix, when he already had the age of 90 years and who died, but I do not know the date.