We continue to our search for filming locations of the 1970 film “Adios, Sabata”. Sabata suspects Ballantine will double cross him and follows him. When he sees riding the opposite direction in the canyon he fires a few warning shots and forces him to stop. Ballantine explains to Sabata he was returning to Col. Skimmel to extract payment for the painting he had finished. Ballantine tries to make a deal with Sabata and split the gold 50-50 but Sabata refuses and states it will be a five way split. 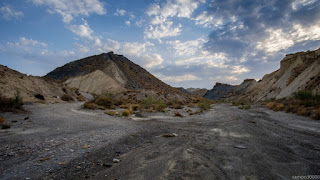