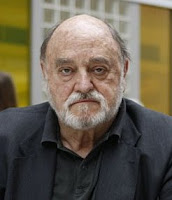 Artist and filmmaker Juan Luis Buñuel, eldest son of Luis Buñuel, his assistant director for a decade and other filmmakers, including Orson Welles and Louis Malle died in Paris on December 7. He was. Before cinema and sculpture, he leaned towards photography. When he was 12 years old, he was given a camera, and during his life he took photos and kept them as if he were preserving an exceptional treasure, which he exhibited at the Buñuel de Calanda Center under the title 'Friends, shootings, encounters and some nonsense'. Juan Luis, under the protection of his father, made the leap towards the direction, both fiction films and documentaries. He was Assistant director on “Viva Maria!” (1965) and “Guns for San Sebastian” (1968) and director on “The Rebellion of the Hanged” (1986).
Posted by Tom B. at 10:24 AM