MALLORY MUST NOT DIE 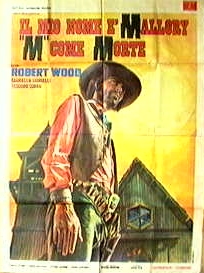 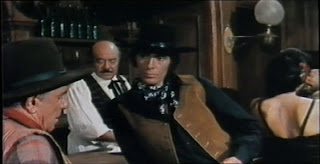 Mallory a famous gunslinger and Hasper a former Yankee army colonel wish now to enjoy in peace the rest of their lives. They become partners and purchase a large farm belonging to a man named Jefferson. After the conclusion of  the deal, Jefferson is killed and robbed of the proceeds of the sale by two henchmen of Hambler and Block, who also threatens to kill Mallory and Hasper  and to take over their farm. Mallory, who has since befriended Corra, Hambler’s younger sister, is warned of an attack is by Hambler’s henchmen. The two sides clash with the criminal and his men, Hasper is killed, while Mallory, badly wounded, is lovingly nursed back to health by Corra. Once well again, the gunman is reluctant to kill the brother of the woman he loves and to avenge the death of his friend: it becomes not necessary, however, because Hambler and Block, after a dispute arises between them, end up with killing each other.

When I was fortunate to interview Robert Woods in the spring of 1989 and mentioned “Mallory Must Not Die” he said he disliked the film very much which surprised me as I thought he did a nice job on the film. I contacted him again last week about any rememberance’s about the film and he replied. “I'm a bit mellower now, Tom and old enough to forget any animosity (and what I wandered into the kitchen for in the first place)... The main thing I remember (apart from Gabriella Georgelli) was that the horse they gave me for it was magnificent and spirited... A few years after this one, when I returned home and was visiting my parents in Boulder, Colorado, I walked into an import/export shop on the Pearl Street Mall and was flabbergasted to discover that the producer of 'Mallory' was the proprietor, he had immigrated to Boulder after the film, We did lunch, as they say, and talked about the film... I was a little embarrassed that I couldn't remember his name (still can't)... but mystified by the coincidence and happy to see him... To my recollection, we never spoke of Boulder when we were working together in Italy... It was weird... These things usually have some sort of deep meaning but if it did, I never figured it out...”