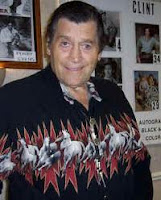 Clint Walker, a twin, was born in Hartford, Illinois on May 30, 1927. It was depression years and the family was forced to move from town to town, wherever there was work. Clint began his own wandering at the age of 16 when he quit school to work in a factory. He later worked on the local river boats, before joining the Merchant Marines at the age of 17.

After a stint in the oil fields of Brownwood, Texas, Clint moved to Long Beach, California, then on to Las Vegas, where he worked as a deputy sheriff at the Sands Hotel. There, he met many celebrities who encouraged him to try his luck in Hollywood. He did just that.

As luck would have it, Clint was quickly introduced to Cecil B. DeMille, who took a liking to him and offered him a part in his latest film, “The Ten Commandments”. Shortly thereafter, Clint was cast in the role of “Cheyenne Bodie” in the series “Cheyenne”, which ran for eight years. “Cheyenne” became television’s first hour-long western and established Clint as one of the new medium’s biggest stars.

When Clint decided to quit the show, he was cast in a number of films, including “None But the Brave”, “The Great Bank Robbery”, “The Dirty Dozen”, “Send Me No Flowers”, “Night of the Grizzly”, “Fort Dobbs”, “Yellowstone Kelly”, and “Gold of the 7 Saints”. Clint, who has a beautiful singing voice, also recorded an album of songs and ballads for Warner Bros.
After “Cheyenne”, Clint made another television series, “Kodiak”, and a number of features and movies for television, including “The Bounty Man”, “Yuma” and “Snowbeast”. Then came a freak accident at Mammoth Mountain, where a ski pole pierced Clint’s heart. Two months later, he was back at work in Spain co-starring with Telly Salvalas as Scotty in his only Euro-western, “Pancho Villa”.

Since then Clint has been involved in other projects through the 90’s, such as “The Gambler Returns”, a Kung Fu” episode, and he joined some of his pals from “The Dirty Dozen” to do voices for the production of “Small Soldiers”. Today we celebrate Clint Walker’s 85th birthday.