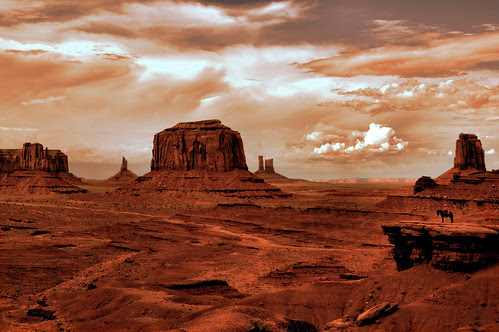 The next stop on Sam and Jill's ride to Sweetwater was the stop at the way station. Part saloon, part stable this location is almost impossible to find. When I visited the site in 2007 we went with a guide who knew pretty much where the location should be. Take the dirt road that the tourist's and tour guides travel to Ford's Point. It is a lookout that you can have your picture taken on or pay for a Navajo to sit on his horse and have his picture taken. The photo above is taken from Ford's Point while the photo from the film below is a few miles to the right of Ford's Point. There is a usually dry stream bed that is on the opposite side of the dirt road from here and you can follow it back a mile or two. You will be on the back side of Merrick's Peak. If you walk along the stream bed on the Merrick side of the creek you should find signs of bricks, logs and if exposed the foundations for the way station. Leone used this site as it is on or near the location of the house used in John Wayne's “The Searchers”. This site is not on the normal guided tours or any road. You'll need a four-wheel drive vehicle and someone who knows the location. 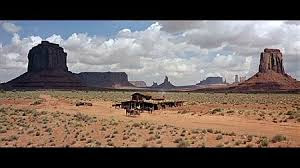