Who Are Those Guys? ~ Luis Ciges 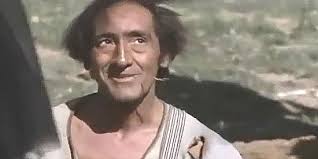 Luis Ciges Martínez was born in Madrid, Spain on May 10, 1921. He was one of the secondary actors par excellence of the Spanish cinema. Since the 1960s he participated in many of the most important films in Spanish cinema. He was the nephew of the writer Azorín and son of the writer Manuel Ciges Aparicio, who was the civil governor of Santander and Ávila, where he was shot by the rebellious soldiers in August 1936. A resident of Mallorca, he is titled in mercantile expertise, after which, in 1941, forced by the circumstances in which the family was left, enlisted as a volunteer in the Blue Division - where he met Luis García Berlanga and went through Poland and Leningrad.2

On his return to Spain, and after studying for two years in medicine and working as a scholar in the laboratory of the tuberculosis sanatorium in Ávila, in 1951 he entered the Institute of Investigations and Cinematographic Experiences, from which he obtained the title of director. He made several documentaries and short films to finish the end of the decade of the 1950s, dedicating himself to the interpretation which he did not abandon until his death. After a somewhat more spaced cinematographic beginning with titles like “Plácido” (1961), by Luis García Berlanga, in the 1970s he intensified his career on the big screen, acting in more than 150 films.

Honored as one of the most solid supporting actors in the Spanish film scene, his lean figure placed him in comic roles or as an eccentric and marginalized character. A fetish actor for Berlanga, he counted on him to play Segundo, the servant of the Marquises of Leguineche in "La escopeta nacional" (1978), "Patrimonio nacional" (1981) and "Nacional III" (1982), as well as for another script in "Todos a la cárcel" (1993). He also performed in the filmography of José Luis Cuerda, in titles like "Así en el cielo como en la tierra" (1995), which earned him the Goya Award for best supporting actor, "Amanece, que no es poco" (1988). ) and "El bosque animado" (1987).

Among the few leading roles he came to appear in, he is especially remembered for the main character in the surreal comedy "Miracle of P. Tinto" (1998), by Javier Fesser.

In television, between 1991 and 1995 he played Ricardo, one of the regular clients of Lourdes Cano (Concha Cuetos) in ‘Farmacia de guardia’, by Antonio Mercero.

Between March and August 2002 he participated in the filming of the hit movie "La gran aventura de Mortadelo y Filemón", directed by Javier Fesser and starring Benito Pocino (as Mortadelo) and Pepe Viyuela (as Filemón), he played his last role (as a rigger in the service of the Republic of Tirania); He did not live to see the premiere (February 2003) because he died on December 11, 2002 at the San Camilo clinic in Madrid of a heart attack.