Who Are Those Guys? – Giovanni Cianfriglia (Ken Wood) 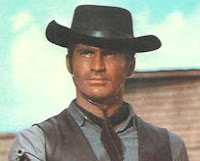 Giovanni Cianfriglia was born in Anzio, Lazio, Italy on April 5, 1935. He is an actor and stuntman who while still very young made an appearance as a stunt double for Steve Reeves in “Le fatiche di Ercole” (Hercules) in 1958, a role he was entrusted with for his handsome body and athletic ability. His main activity in the world of cinema was nevertheless that of an actor: in fact he’s acted in over 125 films in Italy, France and the U.S.A. under the direction of dozens of directors including Sergio Corbucci, Michele Lupo, Enzo G. Castellari and Umberto Lenzi, working on films of many genres, including several films with Bud Spencer and Terence Hill. He has often been credited with pseudonyms including Ken Wood and John Richmond. His brother Domenico is also an actor and stuntman (he was covered last week), often appearing in his brother's films. Giovanni became one of the most recognizable faces as a supporting actor in the Italian western genre. Still active he more recently worked on the Ben Stiller comedy sequel "Zoolander No. 2" (2016).