Spaghetti Western Trivia ~ 50 years ago Once Upon a Time in the West premiered in New York City on May 28, 1969 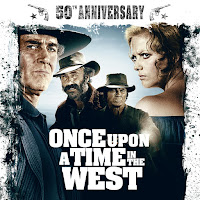 ONCE upon the time in Italy, there lived a little boy named Sergio Leone who, like all little boys, went to the movies quite a lot, particularly to see Hollywood Westerns. In Italy, people like John Wayne and Gary Cooper spoke Italian slang, which never quite corresponded to their lip movements. As a result, there was always something of a distance between the sound and the image of the movies that enchanted Sergio.When he grew up, Sergio became a movie director. Because Hollywood had more or less abandoned the Western, he went to Spain where he made his own Westerns with a star cast off from American television. "A Fistful of Dollars." "For a Few Dollars More" and "The Good, the Bad and the Ugly" made Leone a fortune, Clint Eastwood a first-class movie star, and created what was, in effect, a new movie genre. The world of a Leone Western is just as enchanted as it was in the films the director saw as a child, but the values have become confused. Heroes as well as villains are apt to be motivated by greed and revenge, and the environments in which they operate are desolate and godless, though very beautiful. The Leone Westerns are twice removed from reality, being based on myths that were originally conceived in Hollywood studios in the nineteen-thirties. And, because Leone films are usually shot in Italian and later dubbed into English, there is that same distance between sound and image that existed in the John Wayne movies that Leone watched in his youth. One result of this is that the Leone Western may seem even more arbitrarily violent and brutal than it really is. "Once Upon the Time in the West," which opened yesterday at Loew's State 2 and at Loew's Orpheum, is the biggest, longest, most expensive Leone Western to date, and, in many ways, the most absurd. It is also the first Leone movie to be shot on American locations (Arizona and Utah), although most of it apparently was photographed in Leone's beloved Spain. Granting the fact that it is quite bad, "Once Upon the Time in the West" is almost always interesting, wobbling, as it does, between being an epic lampoon and a serious hommage to the men who created the dreams of Leone's childhood. The movie is eclectic in dramatic detail—it contains the plots of at least a half-dozen movies you've already seen—as well as in origin. Among those who are credited with the story and screenplay are Leone himself and Bernardo Bertolucci, one of the most original of the new crop of Italian moviemakers ("Before The Revolution," "Partner"). Credited with having contributed to the English dialogue is none other than Mickey Knox, best known here as a member of Norman Mailer's rat pack. The movie's narrative outline, which has to do with efforts to grab some land important to the building of a railroad to the West, is simply an elaborate excuse for a series of classic confrontations between classic Western types. Those include Henry Fonda, the kind of killer who will shoot a child at point-blank range; Claudia Cardinale, the hooker from New Orleans (which explains her accent, as it often did when Marlene Dietrich turned up on the frontier); Jason Robards, a gunman with a fondness for widows who look like Miss Cardinale, and Charles Bronson, who plays Leone's favorite Western character, the enigmatic Man With No Name, en route from nowhere to nowhere, a kind of Flying Dutchman of the plains. Although "Once Upon the Time in the West" has moments of genuine impact, such as an early shoot-out between Bronson and three hired killers at a lonely way station, it is mostly fun for the way it cherishes movie styles and attitudes from the past.It's no accident that people like Lionel Stander, Jack Elam and Keenan Wynn turn up in supporting roles, or that when Miss Cardinale, newly arrived in the West, takes the carriage to her husband's farm, the route takes her through John Ford's Monument Valley. I also like the kind of pure movie exchange that takes place when Henry Fonda confronts one of his men for having betrayed a confidence. "You can trust me," says the man. Replies Fonda: "How can I trust a man who wears both a belt and suspenders? He don't even trust his own pants." "Once Upon the Time in the West" thus is a movie either for the undiscriminating patron or for the buff. If you fall somewhere in between those categories, you had better stay home or go see "If It's Tuesday, This Must Be Belgium."