When the Monegros were Arizona: the 'Spaghetti Western' fever that connected Rome, Barcelona and Candasnos

For a handful of liras. Or rather, for a few thousand. That was the main reason that led Italian film producers, who had found their peculiar gold in films of the West, to transfer part of their films to Spain. They were the 1960's of the last century, and the spaghetti western lived its golden age. The Iberian connection was carried out by the Balcázar Studios, a furrier company converted into a film industry, which thought that, although Almería was the usual scenario for these films, the Monegros were closer to Barcelona and would be cheaper. Now, the documentary “Goodbye Ringo” recovers part of this little known chapter of Spanish cinema.

Pere Marzo (Barcelona, ​​1988), director of the film, explains how this story reached his hands: "It was pure coincidence, a friend told me about the existence of an actor who shot many westerns, George Martin, who was actually called Paco Martínez and I was from Barcelona, ​​I was pulling that thread and I arrived at the Balcázar Studios, the epicenter of western production in Catalonia and Aragon, how was it possible that something so powerful existed, in which directors known as Duccio Tessari were involved? or Tinto Brass, and that nothing is left of that? "

Out of that frustration arose the challenge of trying to locate the last survivors of that industry and record their story. "Directors, actors, technicians ... people who stopped making films a long time ago, but who still had their eyes sparkling when we asked them how those movies were made," says Marzo. Among those names are the five protagonists of the documentary: Alberto Gadea, who was an actor and head of specialists at Estudios Balcázar; Paco Marín, director of photography; the directors Giorgio Capitani and Romolo Guerrieri, and the producer Maurizio Amati.

The people disappear - Capitani died shortly after the filming of the documentary - but the landscape remains. “Goodbye Ringo” opens with Alberto Gadea recreating one of the most memorable scenes of “Yankee” (1966), the shooting, shot in the desert of Cardiel. Other still recognizable scenes of that film by Tinto Brass are located in Alcolea de Cinca.

"The spaces tell us many things," says Pere Marzo, "sometimes by opposition, such as the site where the Balcázar Studios were, where nothing remains today, and others, because the landscapes of Fraga, Alcolea, Chalamera or Candasnos are still linked to those films, because they are still recognizable and still allow today to remember the westerns ... With a bit of props, as they did then planting cactus for the scenes, they are still perfect scenarios ".

Among the films shot by the Balcázar in the Monegros and Bajo Cinca, March highlights the well-known as Saga de Ringo: “A Pistol Ringo” and “The Return of Ringo”, 1965 and 1966, respectively; of these, the first was shot in Almería, while the exteriors of the second one have Fraga as their location. "Now these titles do not tell you anything, but at the time they were a bombshell, there are even those who consider them the true initiators of the spaghetti western phenomenon, because although Sergio Leone had already premiered “A Fistful of Dollars” in 1964, these were a great success at the box office. " Likewise, Marzo recommends recovering the aforementioned “El Yankee” and “The Ruthless Four” (Giorgio Capitani, 1969), which he describes as "a little gem".

Much of the history of these shootings in Alto Aragón was also recovered in 2011 by Sergio Belinchón in his Western exhibition, produced by the Diputación de Huesca. In that exhibition, from a perspective closer to art, in addition to the history of the films under the Balcázar label, those produced by the producer of Ignacio F. Iquino were included: between the two, they added almost thirty films in land of Huesca, with such American titles as “Nevada Joe” (1964), “Gunmen of Arizona” (1965), “Five Giants from Texas” (1965), “Dynamite Jim” (1966), “Texas Kid” (1966) or “The Fabulous of Trinidad” (1972).

The end of the Balcázar Studies was "the fall of an empire", in the words of Pere Marzo. "In a decade, between 500 films of the West were shot between Spain and Italy, a lot of money, so much money that producers closed deals to make movies without even knowing the plot." The public got tired of that, they stopped being successful at the box office and the genre went into decline, "explains the director of “Goodbye Ringo”. This was joined by the crisis in the sector and a change of model in Spanish cinema that made large studios unviable. Esplugas City, the gigantic town built in 1964 on the outskirts of Barcelona, ​​stopped making sense.

Against this background, the Balcázar put The End to their business adventure in a big way. The family tried to get a final performance to turn the set into a theme park, in the style of the existing ones in Almeria. However, the "legend" tells, according to March's own expression, that the Minister of Information and Tourism at the time, Alfredo Sánchez Bella, on a trip to the Catalan capital, observed with horror what from a distance looked like a shanty town , and immediately ordered its demolition, because of the bad image that it transmitted to the tourists who landed in Barcelona.

In this way, the Balcázar’s burned and dynamited the whole town, with its Saloon, its Bank and its place for hangings, and they shot the scene to take advantage of it in their last film: “Now They Call Him Sacramento”. A film-worthy ending to a dream whose memory still runs through the dusty plains of the Monegros. 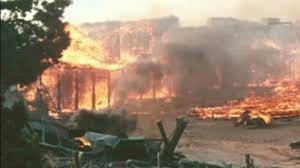