From July 6, 2018, Engelberg will again become the scene of the "Karl May Open Air Play". After the success of last summer, the producers have decided to set up a new Winnetou production. There are many familiar faces in the new adventure, as well as some new ones.

As a "villain" Rollins and as an opponent Winnetous could be committed to the well-known and popular comedian Peter Pfändler, who is looking forward to his stage debut as Rollins in Engelberg: "It is a huge challenge, I have to be much more disciplined and not spontaneous, funny Sayings, "he laughs. As Winnetou in turn Tom Volkers will be on stage, who also acts as a producer and has also written the new book to Winnetou II. As a Ribanna is the sympathetic Lucerne actress Giusy Bringold.

Action Winnetou II - Ribanna and the hatchet of the Poncas

They faced each other in a duel: Old Shatterhand, the man with the iron fist, and Winnetou, son of the Apache chief. It was a life and death struggle that ended in a wonderful blood brotherhood. Well, a year later, they meet again. Together, you will make your way to the tribe of the Assiniboine Indians. At her side the famous shamrock with Sam Hawkens and his two companions. But shortly after the departure, the troupe gets into a first fight. Ribanna, the chief daughter of the Assiniboins, is beset by the warriors of the enemy poncas. Winnetou can save her and soon the two fall in love.

For togetherness but not much time, because the dark chief of the Poncas, Parranoh, forges plans to attack a trek. Old Shatterhand and Winnetou, however, thwart this plan. Now Parranoh thinks about revenge. Our heroes find shelter in the fortress of Old Firehand. Her new acquaintance is also done by Ribanna and would like to get to know them better. However, Old Firehand is not the only one, even Parranoh would like the chief's daughter to wife and no obstacle is too big for him. On his vendetta, he now wants to loot the fortress Old Firehands and bring Ribanna in his power. The trick he has already devised ... 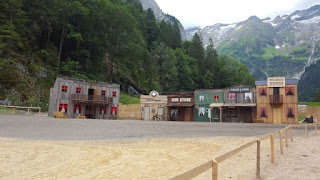