As part of the well-regarded Sundance Kids section, Alexandre Espigares' take on the beloved wolf-dog offers up warm-hearted charms and often stunning animation.

Jack London’s “White Fang,” the classic story of a wild wolf-dog rendered against the harsh environment of gold-rush Alaska, has spawned a number of cinematic adaptations — a well-regarded 1991 live-action feature starring Ethan Hawke, a 1993 animated series — but it’s in the hands of Luxembourgish animator Alexandre Espigares that the tale comes to its most vivid life. Adapted from London’s novel by a cadre of screenwriters (there are three listed in the film’s official press kit: Dominique Monfery, Philippe Lioret, and Serge Frydman), Espigares’ film captures the essence of London’s hard-knock story while reimagining it for a slightly younger audience (in short, it’s still traumatic, but not traumatic enough to drive away the audience who will also love it so very much).

That the film includes some star-studded voice talent for this American version (the film will be translated for a variety of territories), including Nick Offerman, Rashida Jones, Paul Giamatti, and Eddie Spears, is a nice touch, but even their contributions are overshadowed by the lush animation and memorable moments that make “White Fang” such a standout. While the film mostly adheres to the plot laid out in London’s 1906 novel, Espigares and his collaborators have lightened up some of its worst moments (no need to worry about that pack of lynx kittens) and a time-flipping narrative helps dilute the tougher stuff that comes later in White Fang’s story.

And yet, it starts with heartbreak: White Fang’s final dog fight, where he’s billed as the “legend of the Klondike” and the most fearsome creature in town. He collapses before the fight can even get going.

“White Fang” then slips back to his time as a pup, trundling around the wilds with his mother Kiche, and giving way to a wordless and wondrous exploration of the natural splendor of Alaska. The painterly style that informs the film’s animation is best suited to these sequences, rendering White Fang, Kiche, scores of fellow animals, and their forest home in evocative style, so carefully crafted that you want to reach out and touch every leaf and tuft of fur. Despite such intense beauty — there’s one scene that sees White Fang and Kiche observing falling snow that’s already a frontrunner for best of the year — “White Fang” never lets the worries of the real world slip away, and the two wolf-dogs are constantly left to contend with hunger, fear, injury, and worse.

There are threats on all sides (that first sequence makes it clear that White Fang will eventually fall prey to the worst of them), and the introduction to still more humans speaks to the scant weaknesses of the film: Most of the human characters don’t look as lovely as White Fang and his mother. They appear harsh and big-eyed, even when they’re friends (and if they’re foes, all the more horrifying; Giamatti’s character is a wretch for the ages), and their dialogue often feels stilted and limp. When “White Fang” focuses on its real stars — animals, Alaska, the spread of untamed country — it’s as visionary as any animated film. Placed alongside ham-fisted humans, it loses its power.

That may be the point. London’s novel never skimped on portraying the darker sides of human and beast, and “White Fang” is as much about man’s need to confront the wildness in order to move into domesticated space as it is about unbroken animals doing the same thing.

As White Fang comes into contact with still more humans, he’s forced to contend with their very different approaches to the world and those that inhabit it. From Grey Beaver (voiced by Spears), his first human master — here portrayed as far more virtuous and loving than London originally wrote him — to the evil Beauty Smith (Giamatti) and the warm-hearted Weedon Scott (Offerman), “White Fang” navigates both its lead and its audience through the best and worst that mankind has to offer.

The film makes the same argument for animated offerings, deftly moving between scenes as stirring as dazzling and lavish as could be provided by any live-action film, before swinging towards an uneasy depiction of the human world. The power and majesty of White Fang, a truly wonderful protagonist, still makes a journey worth taking. 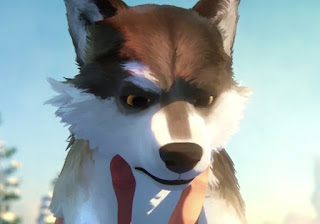