It was 50 years ago today that we saw the premier of Elsa Martinelli, Robert Woods and George Eastman in the Belle Starr Story. Directed by Lina Wertmuller under the alias Nathan Wich it told the story of the Bandit Queen of the West, Spaghetti western style.

Myra Belle Shirley’s compelling love for two men forces her to take up the life of an outlaw and she becomes the legendary Belle Starr. Losing a game of poker with Larry Blackie (Eastman), Belle Starr (Martinelli) is offered a final game to retrieve her lost money if she’ll put up her body for the pot. She loses the game on purpose by discarding her winning hand. Leaving herself at the mercy of Blackie and his bed, from here on the film concentrates on her relationship between the pair, sometimes loving, sometimes rough but always a rivalry. The first half of the film is in flashbacks showing how the relationship developed. The second half is real time with the pair pitted against each other in trying to steal a load of diamonds. Also developed is Starr’s relationship with Cole Harvey (Woods) who she uses as a substitute for Blackie when he’s not around. The ending is pure Spaghetti Western as Belle is faced with running away with Cole or rescuing Blackie who is in the hands of the Pinkerton’s and being tortured for information. 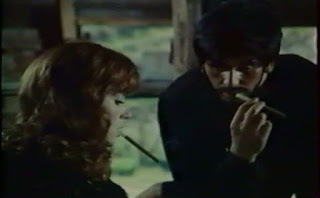