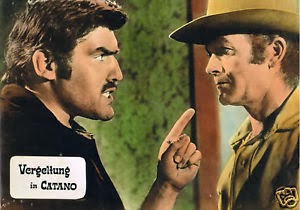 Abel Dragna and his gang arrive in town and find out their old pal Jess Kinley, who used to ride with the gang, is the towns sheriff. The gang begins to bully the citizens to see how much they can get away with. When Jess fails to stop their actions they push a little harder including assaults and even a murder which they claim was in self-defense. When the Sheriff fails to jail the law breakers the town thinks he is a coward and takes his badge. A young woman named Anna-Lisa Schmidt, who helps her father run the town’s stable, continues to have faith in the sheriff and also has a crush on the older man. The town feels a sense of relief when Abel and his thugs leave town but they are filled with concern when the gang returns, having relieved another town of a few bags of gold. Jess decides to show the town he is not a coward and confronts both Abel and his own past. When Anna-Lisa is attacked by one of the thugs Jess and the town unite to defeat and eliminate the outlaws.